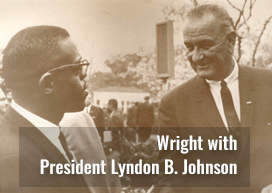 S.M. Wright was born in Dallas on February 7, 1927, to the Reverend Calvin and Mary Wright. He grew up in one of the poorest neighborhoods in Dallas, the Bon Ton community. As a child, he was determined to “be somebody,” so he focused on his education, graduating from Lincoln High School and earning a bachelor’s degree from Bishop College in Marshall, Texas. He later earned master’s and doctoral degrees from Bishop College. 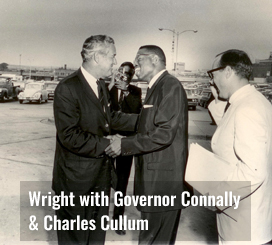 Dr. Wright became the pastor of the People’s Missionary Baptist Church in South Dallas in 1957. A natural leader, he served as an advisor to elected officials, businessmen and civic leaders. He was known for his ability to unite diverse ethnic groups peacefully. During the turbulent 1960s, Dr. Wright worked with city leaders to foster integration in education, employment and political representation as well as in restaurants, hotels, shops and swimming pools. He died on November 3, 1994. To honor his legacy, then-Governor George W. Bush changed the name of Highway 175 to the S.M. Wright Freeway in 1995.